Home » Can Dogs Eat Salami? What You Need To Know 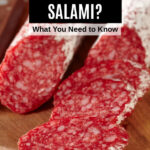 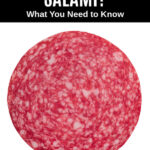 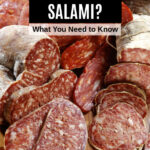 Is it safe to share your snacks with your dog? If you have ever wondered, “can dogs eat salami” then keep reading – this is everything you need to know!

If you have ever munched on some salami and had your pup look up at you, longingly, begging for a bite, then this post is for you! I’ll tell you all about dogs and salami – whether it is safe and what to watch out for.

For ultimate pet safety, I recommend consulting with your vet about all the questions you have about your dog eating salami.

Dogs love the salty cured meat, but it has so much sodium and fat in it, that you should be careful how much they eat.

Salami isn’t toxic to dogs. In fact, you probably won’t notice any negative side effects if they eat some.

However, if your dog eats a lot of salami regularly, it could affect their weight and hydration levels.

Is Salami Bad For Dogs

Some salami might be bad for dogs – read the ingredients label before letting your pet eat it. Watch out for any salami that is made with onion or garlic powder – these are toxic for dogs.

If your dog eats too much salami, these are the signs to watch out for. Please call your veterinarian if your dog experiences any of the following symptoms.

There are tons of different types of salami and each of them has their own risk for your pet. These are the most popular kinds. If you have questions about a type of cured meat that isn’t on this list, please consult with your vet.

Cotto salami is meat that was brought to a high temperature doing the preparation process. Dogs can safely eat a small amount of cotto salami – the cooking process doesn’t make it dangerous for the dogs.

Dry salami is usually made with beef and has less fat in it than Genoa salami. Dogs can safely eat a small amount of dry salami. Watch out for any added spices that might harm your dog.

Genoa salami is usually made with pork meat, fat, and wine. It’s aged without any heat and is usually greasy.

Dogs can safely eat a small amount of Genoa salami. Just watch out for signs of over consumption of sodium – like being overly thirsty.

Hard salami and dry salami are often used interchangeably. Dogs can eat hard salami as long as it doesn’t have any added harmful spices and they don’t eat too much of it.

If you are going to give your dog some salami, slices are the best way to do it! Yes, dogs can eat salami slices. You can give them a few slices once in a while as a treat.

Salami sticks are problematic for dogs because they will want to eat the entire stick. Eating too much salt can lead to sodium toxicity or dehydration.

It’s easier to just keep the salami sticks away from your pet.

Dogs should not eat spicy foods. Not only is it uncomfortable for them, it could also upset their stomach too. Don’t give your dog spicy salami.

Learn more about dogs and spices.

Uncured salami contains less salt than cured salami, but dogs should still only eat small amounts of uncured salami. This meat still has lots of fat in it. Too much fat is bad for your dog’s heart and digestion.

Turkey has less fat in it, so it’s a better choice for dogs than other salamis. However, you still want to limit how much of it your dog eats since it will still have high levels of sodium.

How Much Salami Can A Dog Eat

How much salami a dog can eat depends on their weight. For example, a 33-pound dog should have less than 100 mg of sodium. There is 214 mg of sodium in one slice of salami.

That is why I urge you to be careful with it and only give it to your dog on rare occasions.

Even though salami isn’t toxic to dogs, you should only give it to them once in a while and on days when they don’t eat any extra salt.

Salami is high in sodium and fat. It could cause health issues if they eat too much of it too often. Just be careful and stay in touch with your vet if you notice any health issues.

Here are some more articles about the best and worst foods for your dog to eat.

Find lots of articles on food dogs can and can’t eat on Spoiled Hounds.