Home » Can Dogs Eat Bologna? What to Know About Dogs and Bologna 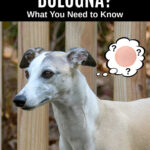 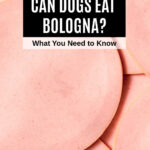 As much as your dog is probably going to beg for a piece, can dogs eat bologna? Read this guide before you share your sandwich with your pup.

It might seem harmless to share a piece of bologna with your furry friend. But there are lots of health risks when you let them eat this mystery meat.

Bologna is not dog food, even though almost all dogs would eat up their fill if given the chance. Keep reading and learn more about whether dogs can safely eat bologna – and what to watch out for.

For ultimate pet safety, please ask your vet any questions you have regarding your dog eating bologna.

As dog owners, we only want the best for our pups, and sometimes we just want to share our food with them. No matter how much they beg, you should not let your dog eat processed meat of any kind. This includes pepperoni, hot dogs, and trail bologna.

This guide will go into detail about all the different types of bologna out there and the dangers they pose to your dog if they eat it.

Even though one slice probably won’t produce many effects on most dogs, it’s safest not to press your luck.

Is Bologna Bad For Dogs

Bologna is not healthy for dogs. It is really high in both fatty acids and amino acids and has lots of salt in it too. Dogs that eat a diet high in fat are at a greater risk for obesity and heart disease.

There are also a lot of other health problems associated with bologna sausages, such as the increased risk of cancer, chronic diseases like COPD, and even hypertension.

These health risks increase if your dog eats a diet high in fat and calories – so a dog that eats a healthy diet might be able to safely enjoy a little bit of bologna once in a while.

Is Bologna Good For Dogs

No, bologna is one of the people foods that are not good for dogs. In fact, different types of bologna are known as bad foods because it has harmful ingredients such as too much salt that can make dogs sick if they eat too much of it.

There really isn’t anything healthy or good about bologna.

No, puppies should not eat bologna. It’s a good choice to just feed your young puppy a nutritious diet of food formulated for their growing bodies.

Alright pet owners, let’s look even closer at all the different types of bologna we can buy at the store. Please scroll through and find your favorite and see how safe it is for your pet.

Remember, a small amount of these foods is generally safe for dogs on occasion, but it is probably best to just avoid giving it to them altogether.

No, dogs should not eat beef bologna. These types of meat products have way too much salt in them to be a good idea. Larger dogs might be able to digest a small amount of bologna, but smaller dogs can’t handle that much salt.

Dogs should not eat chicken bologna either. It is a little bit leaner, but it still has way too much salt for a dog to eat.

Even though this type of bologna sausage has less fat in it, you should still only give your dog a little bit at a time as a rare treat.

A small amount of turkey bologna might be ok for most types of dogs. Don’t give them a large portion of it every day – moderate how much they eat.

No, dogs should not eat Lebanon bologna. Not only does this meat have too much salt, but it also had brown sugar added to it. Dogs should not eat any types of food that have sugar because it could increase their risk for obesity and diabetes.

Can Dogs Have German Bologna

German bologna is very risky because there are a few different ways to make it. Do not give your pet any kind of bologna that is made with garlic or onions, since these ingredients are toxic for dogs.

No, dogs cannot eat garlic bologna. This is unsafe for dogs since garlic is poisonous to dogs. If you think your dog ate bologna that was made with garlic, please contact your veterinarian.

Dogs should not eat ring bologna since most types are made with corn syrup and other spices.

Be very careful and read the ingredients before you share them with your dog. Some types of train bologna are made with garlic, which is poisonous to dogs.

As long as it is not made with added sugars, garlic, or onion, a little bit of white bologna might be safe for your dog.

Even though it is a good idea to always give your pet organic food, the bologna still has too much salt to be a healthy treat.

They are known for making hot dogs, but they also make lunch meat. Dogs can safely eat a little bit of this kind of bologna as long as it doesn’t have garlic or onion in it. It might be sweetened with con syrup – which is why I suggest only giving them a little bit once in a while.

It isn’t very healthy for them, but dogs can safely eat a small amount of fresh bologna as a rare treat. This comes with a catch: do not let your dog eat anything with garlic or onion.

Bologna is a cured processed meat, so you don’t have to cook it before giving a small amount to your dog.

There really isn’t a good reason to cook bologna before sharing it with your dog. Yes, you can safely share a small amount of cooked sausage with your dog.

The cooked sausage is safest if it is low in salt and doesn’t have any garlic or onion on or in it.

No, dogs should not eat fried bologna. This is not a healthy treat. Avoid giving your dog any kind of fried food. They have too much fat in them and could put your pet at risk for heart disease.

As long as the lunch meat doesn’t have garlic, onion, or any added corn syrup or other sugars in it, it is safe to share a small amount with your dog.

My Dog Ate Bologna – What Do I Do

The first thing you need to do is try to figure out how much bologna your dog ate. This is especially important if you think your dog ate a lot of meat that has garlic or onion in it.

Then, watch for signs of digestion issues or lethargy. If your dog is acting really sick, call your veterinarian. Chances are your dog might be able to digest it just fine, but please ask your dog’s veterinarian if you are worried at all.

So, can dogs eat bologna? If you are looking for a treat for your pet, the best option is to give them food that was made specifically for dogs.

The safest types of meat are plain and made without any additional seasoning – like roast beef. Even though a small amount of bologna might not hurt them, over time all that fat and salt could cause health issues. The best and safest option is to just avoid it completely.

Food made with corn starch, sodium chloride, or added sweeteners is not a type of meat that is healthy for pets, especially small dogs.

Here are some more resources about different meats dogs can eat and the types of human food that are bad for them.