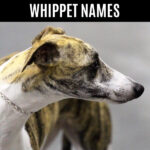 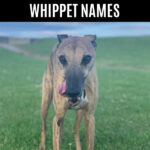 Famous people, celebrities, athletes, artists, singers, and musicians positively impact our lives with their talent. We admire them and sometimes the admiration is reflected when naming our pets.

These notable people and music inspired whippet names are tremendously fun and creative. It’s an interesting variety, from science to soul.

And, of course, it is one of the best dog name lists because it has pictures! You can see the whippet that actually has the name.

What could be better than looking at adorable whippets with remarkable names? Well, it would be awesome if you could reach in and pet them too. Unfortunately, that particular technology doesn’t exist.

So what are you waiting for? Scroll on down and get ready to smile.

A very special thanks to all the kind whippet owners who allowed me to use their photos for this article.

So much fun to see whippets named after someone the owner admires, a celebrity, or a famous person. Many are very creative and unique.

Part of Playboy Litter. He’s a Toronto Whippet who races, courses, and models in Art School.

Because he was found in such terrible shape and by the grace of God he survived. So we named him after the friend that Jesus raised from the dead.

His owner says he has the body of a gladiator and the mind of a mouse.

His owner says he’s living up to his flamboyant name.

Exceptional dog names inspired by music, musicians, or people in the music industry.

His owner’s last name is Vedder so she had to name him Eddie.

North Star Bat Out of Hell

Named after the partial Fleur de Lis over her right hip. Registered name after the Rolling Stones track “She Smiled Sweetly”. She has grown into that name quite a bit.

The Queen of Soul

Named after the hip hop dancer.

Miley’s liter was named for the celebrity judges on The Voice (Miley Cyrus) so she arrived with her call name at 6 months. We were to choose a song title from their namesake’s song library. I chose “Who Owns My Heart”.

What great people and music inspired whippet names! Which one is your favorite? Leave a comment and let me know.

Want to see more? Take a look at these:

Curious about whippets? Take a look at the American Kennel Club Whippet Information.