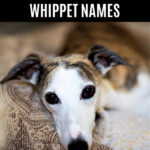 Attention dog lovers! These object-inspired whippet names are incredibly clever. Whippet owners can be so brilliant when it comes to naming a dog.

An object can have a special meaning or place in the heart. It’s why people have collections and dearly hold on to some items.

What’s fun is to see how objects turn into being the best whippet names. Some are quite imaginative and others are surprising.

Ready to see them? Just scroll down, take a look, and get a smile along the way!

Very special thanks to all the kind whippet owners who allowed me to use their awesome whippet pictures for this article.

The litter had a camera term theme.

He has a circle on the top of his tail that when he wags it, looks like a Pac Man going wacka wacka.

Another whippet in the camera term theme litter.

For the chroma technology in cameras and photography.

Her human mom is an awesome photographer. Take a look at her website: Julie Poole Photography.

Named after a Harley Davidson motorcycle.

Their owner said the next whippet will be called Beaker.

Such great object-inspired whippet names! Which one is your favorite? Leave a comment and let me know.

Share this article to spread the fun of these adorable whippets with their clever names. It may just cause someone else to smile.