Home » Why it is Important to Socialize a Puppy 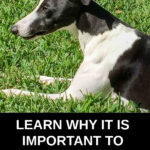 Are you thinking about getting a puppy? Or you just got one? My guess is you are searching the internet for information and run across articles on dog socialization. Hopefully, it’s how you got to this one. So, I’ll get right to the big question…

Why is it important to socialize a puppy?

The simple answer: Without proper socialization, a puppy can develop and have major and serious behavioral issues. These issues are extremely difficult to overcome. How do I know this? Because I deal with this every day with my dog Milo.

Milo is a fearful dog. It is because the breeder did not socialize him at all. He spent the majority of the first 5 months of his life in a crate (he was 5 months old when I got him). He was in a separate kennel type environment with other dogs and away from humans.

Milo is a whippet. Regular, socialized whippet puppies are full of energy, playful, curious, mischievous, adventurous, and fearless. Milo was none of that. It is obvious now the breeder we got him from does not understand why it is important to socialize a puppy. She said he was shy. Yea right. Shy is how she defines a dog without any normal social behavior whatsoever.

The first sign of the breeder’s neglect was Milo’s belly. When we got him, his belly was covered in dried urine. Later I realized it was because of his fearful, submissive peeing. He was so terrified of most everything and he would pee a little when something startled him.

He didn’t know how to play. I had lots of toys for him. I’d throw a ball and at first, he didn’t chase after it. Finally, when he did, he came back and plopped on the ground. Whippet puppies are not like that. They’ll run with a toy, shake it, try to eat it, play catch me if you can, and all kinds of things.

Milo would cower in the corner of the yard by the fence when I let him out. He was too terrified to walk or run around the yard. Everything about outside frightened him including wind. Yes, even to this day he is afraid of wind. When I let him out on a windy day, his tail will be tucked under and he will try to run back inside as quickly as he can.

Milo did not know how to drink water from a bowl. Right after we got him, I noticed he wasn’t drinking water. I had to hold up the water bowl near his nose then dip my finger in the water and let him lick my finger. Finally, he put it together and started drinking from the bowl. I believe he only had water from a drip type bottle attached to the crate.

He is very fearful of men including my husband. We’ve had Milo for years and he rarely will allow my husband to pet him. Usually, he’ll shy away. He’s less fearful of women. I’ve only seen Milo walk up to a woman a few times. It has only been in our yard and after the woman is somewhat familiar and being around a few times.

The list of his fearful behavior goes on and on. It’s sad to see him go through life with such fears. We are working on it. We’ve had professional training for him and continue to look for more ways to help him overcome his fears.

So, why is it important to socialize a puppy? To make it a well-adjusted and confident dog, unlike my Milo. He turned into a fearful dog and there are more examples of it that happen every single day. It’s why I’ve decided to start a series of fearful dog posts and this is the first one.

Check out these 8 easy ways to socialize your puppy on Dachshund Station.

Quick links to posts about Milo and his fearful dog journey: