Home » Can Dogs Eat Marmite? What You Need To Know 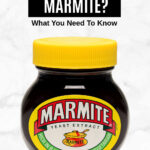 People either love it or hate it, and the same goes for our furry friends. Can dogs eat marmite? Keep reading to find out!

It seems harmless at first, but will a little bit of marmite hurt your dog? Due to the high levels of salt, this isn’t a good choice to share with your canine companion.

For ultimate pet safety, please ask your vet any questions you have regarding your dog eating marmite.

Have you ever wondered, “what’s in marmite?” Lots of people have! This is a savory spread that is common in the United Kingdom. It’s made from yeast extract and contains B vitamins.

It’s a very polarizing spread. Some people claim marmite on toast is one of their favorite tasty treats. Others claim it tastes awful.

There are health benefits for humans associated with eating marmite, but not for dogs. Marmite is a cholesterol-free, fat-free, and sugar-free spread. There are claims that it helps provide a natural source of energy and even helps with symptoms of ADHD.

Marmite contains B vitamins, riboflavin, thiamin, niacin, folate, and iron. This is why experts and marmite fans claim it gives them more energy and focus.

Both marmite and vegemite are made from brewer’s yeast. The biggest difference between the two of them is that vegemite has additional ingredients in it. It contains onion, malt, and celery extracts. The flavor of vegemite is more pronounced and bolder.

Vegemite is a savory spread that is made from yeast extract, as well as additional extracts from other vegetables. Just like marmite, people commonly spread it on toast and rice cakes.

No, dogs should not eat vegemite. While it is safe for human consumption, it has too much salt for dogs. It could give your dog sodium poisoning. Even a little bit of vegemite is bad for dogs.

No, puppies cannot eat vegemite, even as an occasional treat. A small amount of vegemite is bad for your puppy’s body fluids.

Can Dogs Have Marmite

There are 166 milligrams of sodium in a 5-gram serving of marmite. That means that even small amounts of this salty food could lead to sodium ion poisoning.

Dogs should not eat marmite because even a tiny amount of it contains too much sodium for dogs; especially pups that already have health conditions.

Is Marmite Bad For Dogs

Do not give your dog marmite. Yes, it is bad for dogs because it has too much salt in it. If dogs exceed the limit of their daily intake of sodium, it could cause excessive thirst, potential organic failure, or kidney failure.

Even small quantities of marmite could cause blood toxicity from the high sodium levels.

You should also keep your dog away from marmite that has artificial sweeteners in it.

Is Marmite Good For Dogs

No, it is not good for dogs. Due to the high salt content, you should give your dog plenty of water if you think they ate some.

Is Marmite OK For Dogs

A lot of sodium is unsafe for dogs, no matter their size. Even a medium-sized dog could experience a dangerous imbalance of sodium in their body if they eat marmite.

Is Marmite Safe For Dogs

It is not a good idea to give your pet dog anything with marmite on it.

It’s better to make dog treats at home with dog-safe ingredients. These peanut butter dog treats are a better idea.

No, puppies cannot eat marmite. They should get all their nutrition from puppy-focused dog food that is made for their size and dietary needs.

Can Dogs Eat Marmite On Toast

No, dogs should not eat marmite toast. It has large amounts of sodium that is unsafe for dogs and could cause heart problems, among other things.

Can Dogs Have Marmite Gravy

Even healthy dogs should stay away from marmite rice cakes. Not only are there too many calories and carbs in rice cakes, marmite contains high sodium content that is unsafe for dogs.

This is not a healthy snack for dogs. The main problem with a marmite sandwich is the salt levels. This salty human food is unsafe for dogs to eat.

The short answer is that dogs should never eat marmite. Always keep it away from your pet. If you think your dog ate marmite, contact your dog’s veterinarian.

What other human foods are safe for dogs? Here are some more resources about the different types of food dogs can eat:

Find lots of information about human food dogs can eat (and ones they can’t) here on Spoiled Hounds!