Home » Can Dogs Eat Barley? What to Know About Dogs and Barley 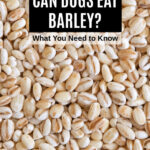 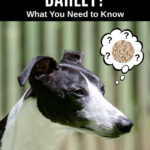 Of all of the grains, is barely safe for dogs? Can dogs eat barley? Here’s what you need to know before giving it to your dog.

You might have heard about the innumerable health benefits of barley for humans. It has both soluble and insoluble fiber, helps people lose weight, and can even help people lower their cholesterol. Does it do the same things for dogs? Keep reading and find out!

For ultimate pet safety, please ask your vet any questions you have regarding your dog eating barley.

There are so many different foods that can upset your dog’s stomach. It can be tough to keep them all straight. Thankfully, you don’t have to. Here on Spoiled Hounds, I’m answering the most-searched-for questions.

Use the search bar and look for the answer to your dog food question. If you can’t find it, let me know. I’d love to research the answers for you and share them here.

So, can dogs eat barley?

Yes, barley is safe for dogs to eat, but you should still watch how much they eat and how they are eating it.

It is one of the common cereal grains, and a little barley might be good for dogs. But if your pet has an aversion or sensitivity to wheat flour, you might want to keep barley away from them because there are common ingredients in them (gluten).

Is Barley Good For Dogs?

Barley actually is good for dogs. You just have to watch how much you give your dogs. Barley is still a carbohydrate (like brown rice). Too many carbs can lead to weight gain.

This is why I recommend buying dry dog food that lists meat protein as the first ingredient.

In moderation, barley is actually really good for your dog.

Barley is the seed of a type of grass that grows around the world. They are in the same whole grains family as quinoa and oatmeal. There are lots of health benefits of barley, even for dogs. They have essential amino acids that benefit your dog’s overall health. It also has vitamin E, which is good for your dog’s skin and coat, and B vitamins that give your dog natural energy.

Due to its high level of fiber, it can help your dog with their cholesterol and blood glucose levels. Since it is a carb – and dogs aren’t designed to live mainly off carbs – too much barley can do the opposite and actually cause weight gain.

Is Barley Bad For Dogs?

The worst thing about barley is that it is a grain. Grains are also known as carbs and dogs that eat too many carbs could gain too much weight, which might lead to heart disease.

Is Barley An Allergen For Dogs?

Even though there is talk out there about grain-free food for dogs, barley is not a known allergen for dogs. That being said, it does have gluten in it, just like wheat. If your dog has gluten sensitivity, don’t let them eat barley. This is the same wheat gluten that is bad for dogs with celiac to eat.

According to the AKC, these are the most common allergens for dogs:

Gluten is known to give dogs allergic reactions, such as coughing, sneezing, or itching. If you notice your canine companion reacts like that after eating barley, don’t give them any more.

Let’s dive into the different types of barley and if they are safe for dogs to eat. Read on to get information on barley cooked, boiled, dry, pearled, flour, grass, and powder.

Dogs can safely eat moderate amounts of cooked barley, just be careful with how you cook it. Don’t cook barley in garlic or soy sauce – both of which are harmful to dogs.

If your dog doesn’t have any known food allergies, you can make your own homemade dog food with beef, barley, and veggies. The Farmer’s Almanac has an easy recipe.

As always, if your dog has never tried barley before, always give him a little bit at first and watch for any reactions before giving them more. If your dog gets stomach upset, give your furry friend some white rice and resume their dry food.

Boiled barley is one of the safest ways to prepare it for your dog. You can mix some meat in with it, but serve it plain. Unflavored food is the healthiest option for dogs because they have such sensitive noses and stomachs.

Barley is also known as cracked pearl barley on the ingredients list of dog food. Pearl barley has lots of plant protein and dietary fiber.

Remember, if your dog has a gluten sensitivity, don’t give them barley. It has gluten in it too.

Barley flour is safe for dogs to eat. You can use it when making homemade dog treats as a substitute for other flours.

The barley that we use in food is actually the seed of the barley grass. So can dogs eat the grass itself?

Grass itself won’t hurt your canine friend. It’s ok if they eat a small amount of it. The grass has the same nutrients as the seeds. It’s a natural laxative, so if they eat too much grass it could cause diarrhea.

Yes, dogs can eat barley grass powder. You can even buy it made especially for dogs. Get Barley Dog on Amazon, there are lots of good choices there.

Barley grass powder contains a wide range of nutrients and has anti-oxidant and anti-inflammatory properties.

As long as the barley soup doesn’t have too much salt in it (or other unsafe ingredients for dogs) it is ok to give them in small amounts. Just like apple juice, you should only give your dog water to drink. Any other types of liquids might make your pet gain weight or consume too much sugar or spices.

In moderation, barley is a safe grain to give your dog. Be careful with how much you give them. If you prepare the barley at home, don’t use any spices or ingredients that will upset their stomachs.

As always, if you have any questions about your pet’s food, please ask your veterinarian.

Here are some more articles about the best and worst food for your dog to eat.

Find lots more articles on what food dogs can and can’t eat here on Spoiled Hounds!